Development of tests to diagnose MPXV infection in under 30 minutes 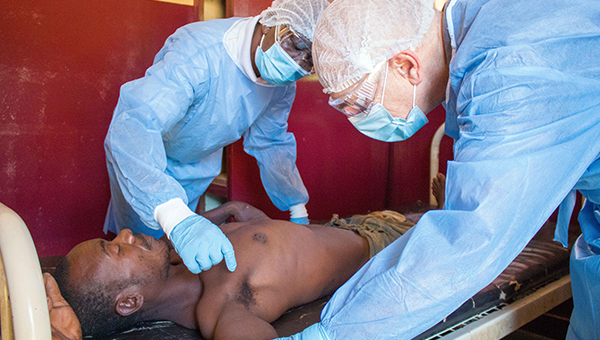 Monkeypox virus (MPXV) is a neglected tropical pathogen whose recent emergence has accelerated its study. In this context, Pasteur Network researchers have developed rapid MPXV diagnostic tests that can be viewed by the naked eye in less than 30 minutes, and are as consistent as the current PCR-based nucleic acid test used for MPXV diagnostics. This new diagnostic tool will contribute to the control and prevention of MPXV epidemics.

In May 2022, outbreaks of monkeypox virus (MPXV) were reported simultaneously in Europe, North America and South America, outside the virus-endemic regions of Africa. Pasteur Network researchers collaborated to develop and validate tests for the rapid detection of MPXV. These newly designed tests can produce reliable fluorescence or lateral flow results on a strip in 20 to 30 minutes. Led by the teams of Emmanuel Nakouné (Institut Pasteur de Bangui) and Nicolas Berthet and Gary Wong (Institut Pasteur de Shanghai), the study presenting the results of these rapid diagnostic tests was published in the journal Viruses.

The tests are based on isothermal amplification of a targeted region of the virus genome, and are based on recombinase with or without CRISPR/Cas12. The tests gave consistent results with the reference molecular test, PCR in real time, for the 19 clinical samples used to validate the assay. In addition, the tests were specific and did not cross-react with other pox viruses, such as vaccinia.

MPXV, a neglected tropical pathogen, is closely related to smallpox, a disease that has been eradicated in humans since the 1980s. Although MPXV epidemics are regularly reported in Africa among the poorest communities, it remains understudied, even after the first MPXV epidemic was reported outside the endemic areain the USA during 2003. Rapid, sensitive and specific detection of MPXV is essential to inform health authorities of suspected cases as soon as possible, in order to monitor epidemic developments. These results therefore provide a point-of-care platform for the early diagnosis of potential MPXV cases, and will contribute to the prevention and control of current and future MPXV epidemics.

Development of tests to diagnose MPXV infection in under 30 minutes