Diagnosis during plague epidemics: the contribution of statistics 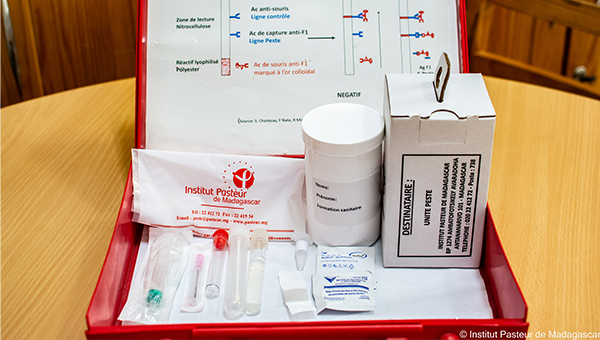 During an epidemic, it can happen that no diagnostic test is perfectly adapted to the pathogen. In order to contain the epidemic as quickly as possible, screening is done using several tests. The interpretation of the results of the different tests becomes more complex, which can make individual diagnosis difficult and lead to an underestimation of the disease’s prevalence. Using the plague outbreak that affected Madagascar in 2017 as a case study, researchers from the Institut Pasteur and the Institut Pasteur de Madagascar propose an analytical framework to characterize the performance of different tests and estimate the true prevalence of the outbreak. Published in the journal Plos Biology, these results will help improve the quality of diagnosis during future epidemics.

Between August and November 2017, 2,414 cases clinically suspected of carrying Yersinia pestis, the plague bacillus, were reported, with a large proportion of pulmonary plague. The samples were analyzed using three types of diagnostic tests: bacterial culture, rapid plague test, and molecular biology or qPCR. Significant discrepancies were observed between the different tests, making interpretation of the results complex. The greatest uncertainty related to the extent of the pneumonic plague outbreak, with positive cases ranging from 1% to 18%. The analytical framework used in this study estimated that 7-15% of suspected cases were carriers of Yersinia pestis for this outbreak.

Estimating the performance of a diagnostic test

Two parameters, specificity and sensitivity, determine the performance of a test. Specificity is the probability of being found negative when uninfected while sensitivity is the probability of being found positive when infected. When there is a reference test with perfect sensitivity and specificity, it is easy to estimate the sensitivity and specificity of other tests by comparing them to the reference test. In the absence of a reference test, as was the case for this plague epidemic, the authors had to estimate the performance of each test and then the prevalence of the epidemic. To do this, they used the latent class method, which is based on the comparison of the results of different imperfect tests. This analysis revealed that molecular biology had the best performance; and that the rapid detection test had limited specificity during the 2017 plague outbreak. Its performance was better the following year, 2018, suggesting that the context of response to a large epidemic can impact diagnostic quality.

Combining results to reconstruct an epidemic

Once the performance of the different tests was known, the researchers determined how to improve case classification algorithms to minimize the risk of false positives and false negatives. They were also able to reconstruct, in a more refined way, the epidemiological trends of the epidemic in space and time. Better classification of cases is particularly important for the allocation of scarce resources, for example by accurately targeting contact tracing efforts where incidence is highest. This avoids deploying resources to false positives and maximizes the impact of mobile testing facilities.

While the development and availability of high quality diagnostics remains a priority, this analytical framework could be a valuable tool to reduce uncertainty for other infectious diseases that lack reference diagnostics. For example, it is already used by the Institut Pasteur de Madagascar to diagnose tuberculosis.

Diagnosis during plague epidemics: the contribution of statistics