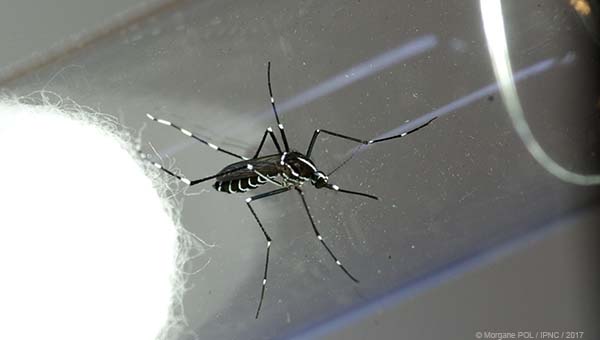 Dengue virus is a pathogen transmitted to humans by vector mosquitoes. It causes mostly mild illness or flu-like syndromes. However, repeated infections are known to cause severe and potentially fatal clinical forms, called severe dengue.

Due to globalization, the geographical distribution of mosquitoes known to transmit the dengue virus is increasing, particularly in non-endemic regions. Dengue global incidence has increased eightfold in the last decades with an estimation of 390 million infected individuals per year across the world.[1] The dispersal risk highlights the need to improve vectors surveillance, ensuring rapid detection of introduced vector species and prevention of their establishment in new areas. The surveillance relies on accurate species identification of the vectors. Aedes aegypti and Aedes albopictus, as known as the tiger mosquito, which have a worldwide distribution, are the well-known vectors of dengue virus. However, in the Pacific region, at least 9 other species belonging to the Scutellaris Group mosquitoes are present and are confirmed or potential vectors of dengue virus.

MALDI-TOF MS for a global surveillance of mosquitoes

Mosquitoes of the Scutellaris Group are morphologically similar and pre-existing DNA sequence information is often unavailable. Therefore, scientists from the Pasteur Network, assessed the use of Matrix-Assisted Laser Desorption Ionization Time-Of-Flight Mass Spectrometry (MALDI-TOF MS) in identifying these dengue virus vector species.  MALDI-TOF MS is a method that generates protein spectra specific for each species.

Field-mosquitoes belonging to 8 species[2] from 6 countries in the Pacific, Asian and Madagascar, were included in this study carried out by the Institut Pasteur de Nouvelle-Calédonie, in collaboration with the Institut Pasteur du Cambodge, Institut Pasteur du Laos and the Institut Pasteur de Madagascar. Analysis provided evidence that a MALDI-TOF database created using mosquitoes from the Pacific region allowed suitable identification from the other regions. This technic was as efficient as the DNA sequencing method in identifying mosquito species. Indeed, for the most cases, an exact species identification was obtained for all individual mosquitoes even for morphologically and phylogenetically closely related species. Ultimately, these findings highlight that the MALDI-TOF MS is a promising tool that could be used for a global comprehensive arbovirus vectors surveillance.