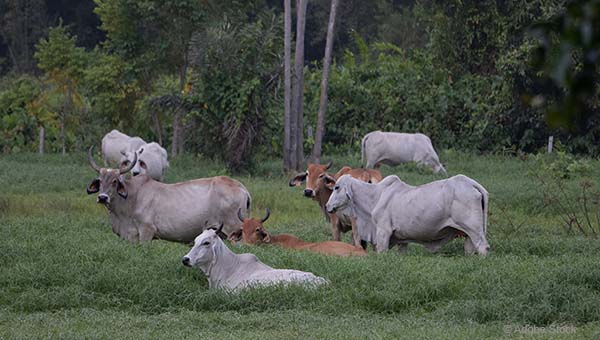 Some pathogens present asymptomatic forms that complicate the study of their transmission dynamics and their determinants. Researchers from the Pasteur Network based at the Institut Pasteur de la Guyane and the Institut Pasteur (Paris), in collaboration with the Cayenne Hospital, have studied the atypical incidence of Q fever in Guyana. Their work, published in The Lancet Regional Health – Americas, estimates a high risk of infection in the general population. They highlight the important role of livestock in transmission.

Q fever is a zoonosis caused by Coxiella burnetii, a bacterium that infects a majority of mammals in most parts of the world. Ruminants, the main source of human infection, can excrete the bacteria in calving products, feces, vaginal secretions, and milk. Transmission is mainly by airborne route and is manifested by clinical signs in humans in only 40% of cases. If present, clinical signs are generally flu-like and non-specific, but may sometimes be associated with pneumonia, hepatitis and, more rarely, with more severe symptoms, especially in patients with comorbidities. 60% of reported cases worldwide have been identified during epidemics centered around farms or slaughterhouses infected with the bacterium.

The French Guiana population has the highest incidence of Q fever in the world. 24% of hospitalized cases of community-acquired pneumonia are attributed to this region. Most of the patients hospitalized came from metropolitan France and lived in the urbanized area of Cayenne and its suburbs. However, the classic risks of exposure (slaughterhouse or livestock in the vicinity) were not found among the diagnosed cases. As no wild reservoir was clearly identified, previous studies considered transmission by livestock to be unlikely.

The atypical nature of its transmission combined with a high proportion of asymptotic cases has made it difficult to understand the epidemiology and determinants associated with Q fever in French Guyana. In order to better understand its transmission dynamics and to orient public health intervention strategies, researchers from the Pasteur Network and infectious diseases specialists from the Cayenne Hospital Center collaborated to conduct a serological survey of 2,700 individuals representative of the different communities in French Guiana.

Domestic livestock as a vector of the disease

The authors modelized serological data classified by age in order to reconstruct the history of the circulation of the bacterium in the different regions of the territory. Their results show a constant circulation of C. burnetii throughout French Guiana with an estimated annual number of cases of 579. 9.6% of the population tested had already been infected and middle-aged men and individuals living near livestock. Analysis of the data identified an epidemic that occurred between 1996 and 2003 in the communes of Remire and Matoury. This epidemic, which infected 10% of the population, explains the high proportion of people carrying antibodies against C. burnetii in the urban area of Cayenne Island.

This collaborative work has made it possible to model for the first time the transmission dynamics of Q fever in French Guiana. The highlighting of the role of domestic livestock in a context of important transmission of the bacterium argues for the reinforcement of surveillance and risk reduction activities in French Guiana’s livestock farms and underlines the interest of a “One Health” approach combining a human, animal, and environmental component.

This type of large-scale serological survey has already been conducted in Bangladesh for dengue and for Chagas disease in Colombia. It allows the study of a wide range of factors contributing to disease control such as pathogen circulation patterns, immunity levels related to vaccination or previous infection or potential areas of emergence. This multi-factorial approach with a very positive cost/benefit ratio (cost of analysis versus amount of data generated/output) is a very valuable tool to promote to public health agencies and authorities.

It is proposed that this methodology could be reused by the members of the Pasteur Network in the framework of a phase 3 of the ECOMORE project involving Cambodia, Laos, Philippines, and Vietnam, in collaboration with the Institut Pasteur in Paris, for which funding is still being sought. Indeed, its use would improve the understanding of the circulation history of a multitude of pathogens (viruses, bacteria, and parasites), representing a public health issue for these countries, and of the epidemiology of their associated diseases in order to propose appropriate interventions to the authorities of these countries.