Pasteur Network, a partner at the conference of French-speaking science journalists in Dakar 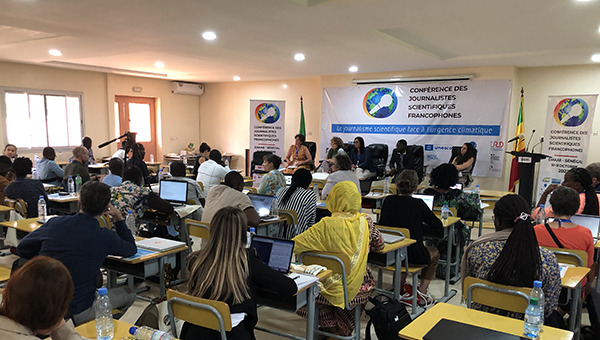 The first conference of French-speaking science journalists was held in Dakar from October 10th to 16th, 2022. It was attended by nearly 60 journalists from more than 20 countries[1]. The Pasteur Network partnered with the event with the aim of sharing the scientific knowledge of its members, all of which are experts in global health. The idea was to bring scientists and journalists together to ensure that only factually verified scientific information reaches the public. Several scientists from the Institut Pasteur de Dakar spoke at the event, demonstrating this commitment to delivering quality scientific information.

The main theme of the conference was journalism and the climate crisis. Several of the topics proposed by the organizers were related to health, an area of expertise for Pasteur Network members like the Institut Pasteur de Dakar.

Neglected and emerging diseases in Africa

Dr. Xavier Berthet, the Institut Pasteur de Dakar’s, Scientific Director, spoke alongside Dr. Digas Ngolo Tete from DNDi during an expert panel discussion on “Neglected and emerging diseases in Africa” on Monday October 10th, the opening day of the conference. Their presentation was an opportunity to take a closer look at these diseases, caused mostly by parasites (sleeping sickness and schistosomiasis) or bacteria (trachoma and Buruli ulcer), that can be very debilitating for those affected. Dr. Xavier Berthet explained how problems affecting populations can be tackled via the initiatives implemented at the Institut Pasteur de Dakar, like the manufacture of biological products at its future vaccine facility, currently under construction in Diamniadio, and infectious disease surveillance.

Zoonoses: situation and challenges in the age of climate change

A panel of virology experts from the Institut Pasteur de Dakar addressed the question “Zoonoses: situation and challenges in the age of climate change” on Wednesday October 12th. Dr. Jean-Michel Héraud pointed out that 75% of the diseases that have emerged recently are of zoonotic origin. Out of the total estimated number of viruses on the planet, known as the “virome,” few are as yet known to infect humans. Factors contributing to emergence, like demographics, uncontrolled urbanization, human-induced environmental changes and climate change, were explained to the journalists in attendance. Dr. Oumar Faye, winner of the 2019 Pasteur Network Talent Award, reiterated the role of WHO Collaborating Centers in identifying viruses. He shared his experiences of the Ebola outbreak and more recently the Zika outbreak in Brazil, which helped him to anticipate and prepare for future outbreaks, for example with a mobile laboratory facilitating access to samples and speeding up virus identification. The scientists emphasized the value of One Health approaches, methods to identify viral reservoirs and the use of genomic surveillance to rapidly detect new threats to human and animal health and better anticipate their emergence.

The conference continued for a further four days, covering other scientific fields such as agricultural models in a +1.5°C climate scenario, with events including workshops for journalists. A visit to a virology laboratory at the Institut Pasteur de Dakar and to the Diamniadio manufacturing site brought the week to a close.

Pasteur Network, a partner at the conference of French-speaking science journalists in Dakar