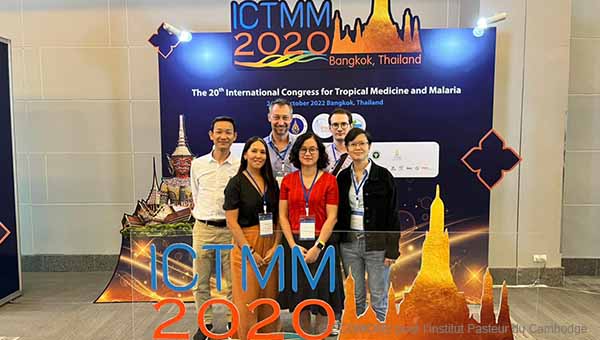 From October 24th to October 28th, Pasteur Network’s scientists had the opportunity to promote their results pursued in the framework the ECOMORE 2, in the 20th International Congress for Tropical Medicine and Malaria (ICTMM) in Bangkok, Thailand. The event allowed to highlight several activities of the project by three Pasteur Network members: the Institut Pasteur du Cambodge, the Institut Pasteur du Laos and the National Institute of Health and Epidemiology in Vietnam. Vector management for dengue, dengue outbreak simulator and, seroprevalence and serovar distribution of leptospirosis are some examples of the topics discussed.

The 20th International Congress for Tropical Medicine and Malaria (ICTMM) was held from October 24 to October 28th in Bangkok, Thailand. This five-day congress gathered key players in the sector to unravel the latest and challenging news surrounding tropical medicine, infectious diseases, neglected diseases, malaria and zoonoses. During the opening ceremony, Associate Prof. Pratap Singhasivanon, Chairman of ICTMM, stressed that these group of diseases still affect the poorest and most vulnerable populations. As climate change-induced temperatures intensify, he pointed out the pressing needs to improve current preventive measures and to further invest in the fight against these diseases. Several Pasteur Network scientists involved in ECOMORE 2, which notably aims to evaluate the impact on climate change on local health population, has shared it results through plenary sessions, topic keynotes, symposia, oral and poster presentations.

The integrated vector management for dengue

On October 25th, Dr. Sebastien Boyer, Head of Medical Entomology Unit at the Institut Pasteur du Cambodge, member of the Pasteur Network, was invited to expose his work in the “vectors, vector control and vector-borne diseases” session. He presented the results of the integrated vector management for dengue vectors in schools with entomological and epidemiological approaches. While a decrease of the core dengue virus vector, Aedes aegypti, density was observed, and toilets were detected as the main breeding sites in schools, the integrated vector control did not decrease the dengue transmission in schools and in surrounding communities. This could be explained by the fact that households are usually the significant spot of transmission.

The design of the dengue outbreak simulator

The next day, Damien Philippon, representing the Institut Pasteur du Laos, had the opportunity, during the “epidemiology and transmission dynamics of dengue” session, to explain the methods for the design of the dengue outbreak simulator, a tool for predicting dengue incidence in Vientiane prefecture. Various data (GIS, epidemiological, mobility, weather, census and land cover) were aggregated into weekly data as input of the model. Although the model is complex as available datasets do not cover the same time frames and do not overlap, its precision allows the prediction of absence or presence of dengue. At present, it does not concern incidence. In near future, more tuning of the model could be performed to increase its precision.

The seroprevalence and serovar distribution of leptospirosis

Prof. Le Thi Phuong Mai, Head of Public Health at National Institute of Health and Epidemiology, one of the three Pasteur Network members in Vietnam, presented in the form of a poster, the results of the multi-center study on seroprevalence and serovar distribution of leptospirosis among healthy people in Vietnam. 600 persons in total were enrolled, from Thai Bing (North), Ha Tinh (Center) and Can Tho (South) in 2019 for testing. A relatively high rate of leptospira seropositivity was reported among this general population, with most seropositive people being farmers. Moreover, the four predominant serovars circulating were Hebdomadis, Pomona, Saxkoebing and Panama. It has been recommended to initiate health promotion program and trainings in using personal protective equipment, among farmers to reduce the risk of infection.

All in all, this congress, which occurs every four years, happened to be a perfect regional showcase to highlight the results of the Pasteur Network scientists dedicated to ECOMORE 2.