What are the origins of COVID-19 variants in Africa? 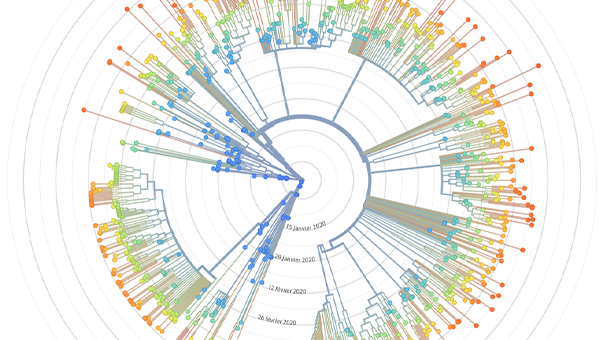 Genomic sequencing enables live tracking of the spread of a virus. A Science paper, released on September 15th, 2022, analyzing more than 100,000 genomes, recalls the benefits of local sequencing while studying the spread dynamics of SARS-CoV-2 and its variants of interest on the African continent. More than 300 authors combined their research including 10 members of the Pasteur Network who shared locally sampled SARS-CoV-2 sequences. The results show that most of the introductions of the virus in Africa were from abroad. They also highlight the critical need to invest in diagnostics and genomic surveillance in Africa to best prepare for and respond to future emergencies and epidemics.

This study reveals a mapping of the transmission dynamics of COVID-19 on the African continent. Increased local sequencing capacity has resulted in improved turnaround times and more regular routine surveillance. Pasteur Network members have shared, via the GISAID initiative, the SARS-CoV-2 sequences in the framework of the REPAIR and AFROSCREEN projects.

The spread of the different COVID-19 variants in the continent was heterogeneous, especially for the Alpha, Beta, Delta and Omicron variants which have followed and still follow distinct patterns of dispersion. The Alpha variant that occurred on the continent emanated mainly from Europe before spreading to 43 countries. Most of the Delta variant introductions (about 72%) came from India, while introductions between African countries of the same variant represented only 7% of cases. As for the Omicron variant, its emergence came from Europe, as well as North America and Asia.

The 200 signatory institutions[1] of this study constitute the largest consortium of African scientists and public health institutions united to respond to COVID-19 using local data. The establishment of the Africa Pathogen Genomics initiatives by the Africa CDC and the continental network by the Africa CDC and WHO AFRO are testament to the intent to expand access to sequencing across the continent. Following the example of this study, sustained monitoring remains essential to maintain quality surveillance of both the circulation of COVID-19 and other emerging or re-emerging infectious diseases that may affect Africa.

What are the origins of COVID-19 variants in Africa?